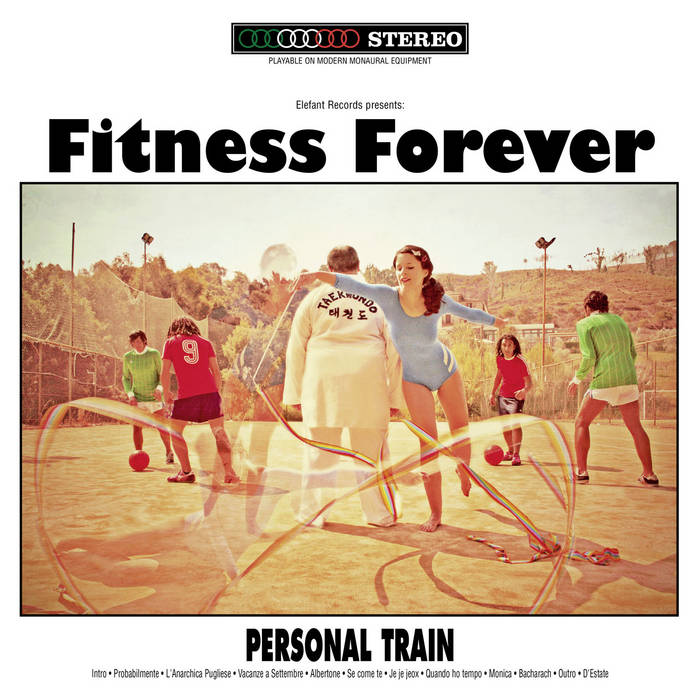 A reissue in vinyl format is available on: bit.ly/2HyNmFH

FITNESS FOREVER is a surprising Italian quartet that is making its full-length debut with "Personal Train", a marvelous pop album that draws together an immense quantity of influences with marvelous taste, the work of musicians who have an extraordinary ability with the fibers of the most precious and elegant pop: from modern points of reference like LA CASA AZUL (Guille is one of their most unconditional fans), CINERAMA, THE HIGH LLAMAS, Richard Hawley, BELLE & SEBASTIAN, THE POLYPHONIC SPREE or even LE MANS, to other classics like Bacharach, Michel Legrand, THE BEACH BOYS, THE COWSILLS, THE FREE DESIGN or Gladys Knight, and last but not least, the Italians: Rita Pavone, Ennio Morricone, Nico Fidenco, Gino Paoli, Piero Umiliani or Mina. All of this comes together in a huge album whose composition (in the style of the songwriters of the sixties, after hours in the studio) kept them locked in the studio for more than a year putting it all together, achieving an album that is full of life, full of grand pop melodies and marvelous arrangements with the utmost care in every detail. It's one of those albums that each time you listen you discover new shades and sounds, and that introduces us to Carlos Valderrama, a name that we will probably be hearing a lot in the coming years, who is capable of bringing together classic sounds with vision. And as you know, exercise: it's highly recommendable for the pop spirits. Here you have your personal trainers.