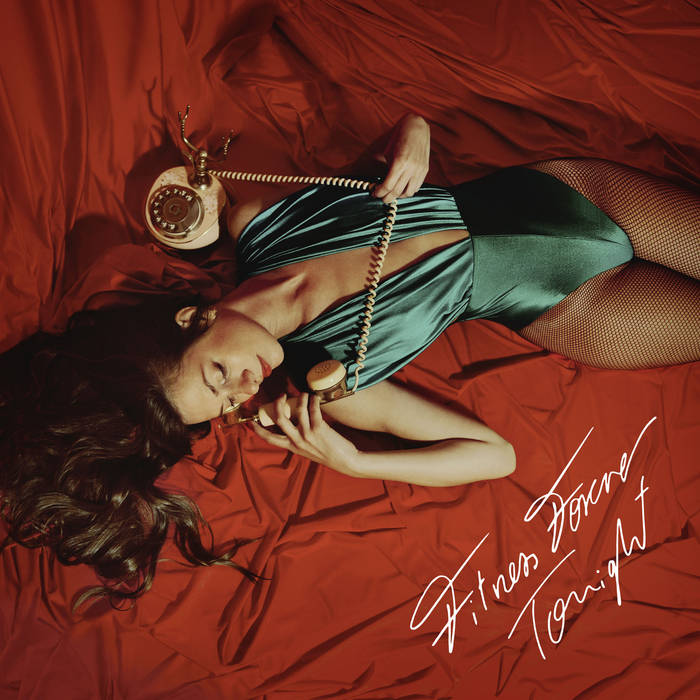 CookieNoCreams You had me at Italo Disco. Favorite track: Cosa Mi Hai Detto.

Calling an album full of Italian-disco “Tonight” is a total declaration of intent. Without mercy. Carlos Valderrama and company’s third album doesn’t let you rest for even a second. Blood, sweat, and tears on the dance floor. Syncopated rhythms, instrumental exuberance, unforgettable melodies. It’s a fine line between those minutes of wakefulness and drifting off into a light sleep, in that undefined space where dreams begin. And all of this is floating around the epicenter of a triangle formed by, on one side, great composers, both Italian and classic, who nourished FITNESS FOREVER’s first album in 2009, “Personal Train” (Ennio Morricone, Nico Fidenco, Gino Paoli, Piero Umiliani and Burt Bacharach). The second side of the triangle is the soft-pop inspiration of the second album, “Cosmos” from 2013 (Paul Williams, Marcos Valle, Serge Gainsbourg and Lucio Battisti), and the third side is the dark, classical names from the Italian-disco tradition scratched from the shelves of the most intrepid music lovers (NUMBER ONE ENSEMBLE, KANO, LE STREGHE, EVA EVA EVA, Alberto Radius, Adriano Pappalardo, Enzo Carella, Franco Califano, Filipponio). And the triangle is wrapped in a dose of the current and contemporary, and the ambiance you can find in bands like JUSTICE, THE GO! TEAM, METRONOMY and DAFT PUNK.

We already gave you the advance single of the title track, “Tonight”, with the participation of Vincent Mougel, KIDSAREDEAD front man and collaborator on a ton of French projects like Juliette Armanet, Mathieu Boogaerts, HERMAN DÜNE, CASCADEUR, HALO MAUD and Ricky Hollywood, among many others. It’s a whip crack full of elegance and driven by wind instruments that attack the choruses and bridges with no mercy at all. It’s a super hit that passes over the most brilliant moments of DAFT PUNK, BELLE AND SEBASTIAN, Guille Milkyway and TAHITI 80. The liberation that happens under neon lights, the dreamy chords, the seductive, contagious groove, the romance of the ephemeral, the unforgettable melodies… All of this is on the table, to take the magical nights of summer beyond the stars.

After that, comes one of the loveliest surprises on the album - Paulita Demaíz’s participation on “Dance Boys”. Surprising, a different tone of voice than we were used to from PAPA TOPO’s earliest recordings, singing in Italian this time, to become the album’s muse, ethereal, delicate, full of fantasy. We also gave you the single for “Canadian Ranger”, a solid, eternal, universal song that Sara Cracknell and Stephin Merrit would definitely play on repeat. Prodigious. Unforgettable. Is it a tribute to ABBA and THE WHO? Let your imagination run wild. “Andre” is an immediate Italian-disco classic. That dirty infectious line, the synthesizer arrangements that respond to the name of the song’s star, that dark, sensual ambiance. It’s the perfect song for Tom Moulton to open the night with. “Port Ghalib” is an instrumental track that makes it very clear how strong the instrumentation is on this album: strings, wind instruments (that sax) pushing against each other and giving way to the singer’s voice with a trotting, untiring spirit of the drums and bass, and the synthesizer arrangements. Tina Charles or THE O'JAYS would kill to sing this song.

On “Baby Love”, the synthesizers (and that vocoder!!) become the stars, with a bass line that reminds us of “Billie Jean”, but accentuating the Italian accent, and the majestic strings that give that intimate, organic touch, giving the songs a feeling of warmth. “Cosa Mi Hai Detto” is one of the few songs where we hear Carlos Valderrama singing again, on a sensual song, probably the only one that, conceptually within the album, is a separate thing. Disturbing, nocturnal, with that final sax that traces the outlines of buildings as dawn approaches. Anna Jean, lead singer and guitarist for JUNIORE (one of the coolest and most prominent groups on Paris’s new scene) lends her sweet voice to the group on “Arbre Magique” (with Juliette David and Joackim Polack of PEARL & THE OYSTERS on backing vocals). This is probably the song that is closest to the pop concept of the first album, again with the strings marking the differences. Delicious. Finally, we have “Carlo”, a farewell in every sense, the melancholy after an intense night of dancing and of abandon, with that precious ending swollen by all the instruments that have decorated the path toward this end, with a lounge-pop spirit.

Recorded with the perfect mix of synthesizers and organic elements, creating a spiral of exciting sounds, “Tonight” has a full string and wind orchestra, conducted by master Gianfranco Campagnoli, first trumpet for Mario Biondi’s live performances, a secret weapon who gives that organic, intimate air to his songs. The album was mixed in Milan at Mob Studios by Mario Conte (keyboardist with LOREDANA BERTÈ and producer of some of the most important indie albums in Italy recently, like albums by COLAPESCE, MEG, IORI’S EYES and DAVIDE PETRELLA LOREDANA BERTÉ). And to finish things off, the album was mastered by “Chab” (Antoine Chabert), who won a Grammy for his work on DAFT PUNK’s masterpiece, “Random Access Memories”, and who has also mastered albums by artists as important as AIR, LA FEMME, Sébastien Tellier, BREAKBOT, KATERINE, Keren Ann and DIGITALISM, to name just a few.

Somehow, Carlos Valderrama’s work as a DJ these last four years can be seen in the conception of an album that looks straight at the dance floor without blushing and without batting an eye. This is an album we will always have in our collection when we DJ, and that will set the tone every night that we go out on the town, that will intoxicate the night’s key moments. A night that could be any night.