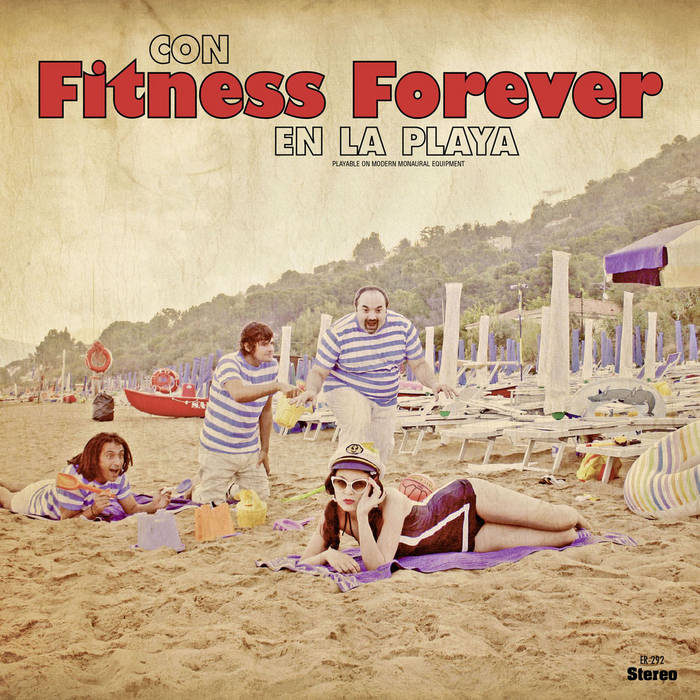 Those sunny, azure-blue sky days are getting closer, those days of peace and revelry, days when the only thing you have to worry about is living and enjoying yourself. And we couldn’t think of a better group to listen to on those days than FITNESS FOREVER. The Italian group fronted by Carlos Valderrama has never needed the summer season to bestow a sunny strength and energy on their songs, as they clearly proved with their full-length, “Personal Train”, and their EP “Mondo Fitness”, but this time this time those feelings of extreme pleasure and hedonism are back and are stronger than ever, with songs made for those summer months, and which will be released on a red vinyl 7” single.

And what better proof of being carefree, of being in the mood for a party, than the song that opens this release: “Botellón”? The song has seventies Spanish-pop influences and the fantastic excesses of OS MUTANTES or Mohammad Rafi, a mutant himself, tremendously fun and lively. Long live the botellón!; it’s the perfect soundtrack for some new Quentin Tarantino-like craziness. After that, it’s time for two different versions of “Brasil”: on the first (the “Magic” version), the band from Valderrama leave the mark of their good taste with the arrangements, the elegance and class with the string instruments, and their delicious harmonies which make us think of precious couples and Bahía beaches. The second version picks up the pace a bit, and they turn it into one of those perfect pop songs, with a touch of bossa and samba that offer an exotic, Caribbean sound, proving that FITNESS FOREVER is capable of moving us all around the world and making us dream, with almost no effort. The album closes with a true wonder. The Spanish version of “Be My Baby”, with Palma de Mallorca as the star, the island that gave name to a song with portentous melodies, splendid arrangements and, of course, castanets. It is emotion in its purest state, that makes us tremble on the brink of ecstasy, culminating in a vibrant and emotional euphoria.

A marvellous release, a summery single that knows how to play with these kinds of record-release clichés to make the clichés succumb to the group’s desires, making them kneel to the service of the melodies, the feelings, and of course, the music. Essential.